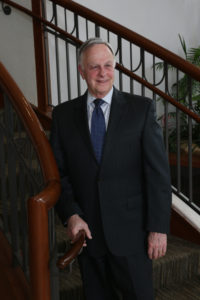 Samuel C. Totaro, Jr. has been chosen to receive the Ursinus College Alumni Award for Service to Humanity.

This award pays tribute for time volunteered for the benefit of a community or non-profit institution.

Totaro, a Partner with Curtin & Heefner is best known for his accomplishments in the field of adoption law and related adoption litigation. He has participated in over 4,000 adoptions of children, representing adoptive parents, birth parents and adoption agencies.

Totaro was lead counsel in Gibbs vs. Ernst, a 1994 PA Supreme Court case which established the rights of adoptive parents to be compensated for failure of adoption agencies to fully disclose all relevant and material information in its possession to the adoptive parents prior to adoption. This
case has been cited by over 20 Supreme Courts in other states as controlling law.

He has appeared in media, including Good Morning America, The Today Show and Anderson Cooper Live. In fact, one of Sam’s adoption cases was made into a CBS Sunday Night Movie of the Week, called A Father for Brittany, and continues to be shown on the Lifetime Channel.

Totaro is Past President of the American Academy of Adoption Attorneys and has served on the Board of Trustees of the National Council for Adoption in Washington, D.C. and the Board of Trustees of both the Bucks County Bar Association and the Bucks County Bar Foundation. He is a Past President of the Richboro and Churchville Rotary Clubs.

He has also served for two decades as Chairman of the Board of Trustees of the Silver Springs/Martin Luther School, a residential treatment facility and school for emotionally disadvantaged children in Plymouth Meeting, Pennsylvania.